In 1996 I was cast as Arthur Lang, the new downstairs neighbor on Webster, the long running television series. Arthur was a circus clown who quit the circus to attend veterinary school and rented the downstairs apartment in the Papadapolis household. Arthur ran away from the circus to join a family! A warm avuncular relationship developed between Arthur and Webster, the little boy of the house, played by Emanuel Lewis. Soon, long brewing tensions in the production erupted, and the show was not renewed. Arthur Lang was never heard from again. 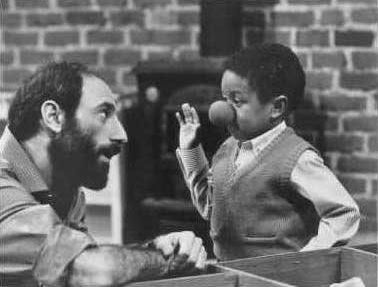 “Something stinks, it’s in the air,”
Said Katherine in her mid-west twang.
“It makes me think and really wonder
What ever happened to Arthur Lang?”

Three o’clock, and home from school
Came Webster with a frown.
“What’s for dinner, what’s that smell,
And where’s my friend the clown?”

“That’s right,” said George, with a silly grin
That covered half his face,
“I haven’t seen old Arthur Lang
Since the day he took the place.”

Next morning in his spaceman suit
Webster drank his Tang.
And said, “Right after breakfast
I’ll visit Arthur Lang.”

What Webster saw would chill your blood
And vanquish any doubt
For Arthur Lang had passed away.
The writers wrote him out.

George said to Katherine,
Later on that day.
“Surely, we can rent the room.
Arthur’s passed away.”

Katherine said to George,
“You big galumfing lout.
We can’t rent the downstairs room
Until the body’s out.”

Webster thought of Arthur Lang
Who’d taught him how to juggle.
His parents brought the body bag
And Webster brought the shovel.

Down they went, step by step,
Right into the place.
But Arthur Lang was not there.
He’d vanished, without a trace.

For when the writers write you out
They seldom leave a trace.
It’s like the end of a baseball game
With no men left on base.